Meet Rosie and Beetle, a pair of pigs belonging to Emma Brown. From the third generation of a farming family, Emma is no stranger to the inevitable lifecycle of agricultural livestock. Yet, there’s no chance of her beloved pigs ending up on her plate, thanks to their charm, intelligence and immense personality 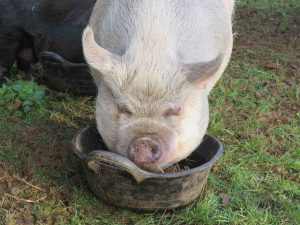 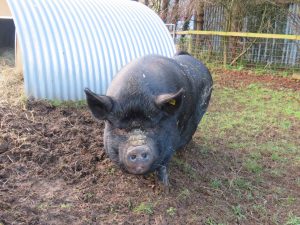 Above: Rosie (pink) and Beetle (black)

When Emma acquired a sow and a clutch of female piglets, there was only one objective and that was to breed from the sow and raise the piglets for meat. A series of unexpected events ensued: the sow reabsorbed the pregnancy (a common occurrence if the sow is not at peak nutrition) and one of the female piglets turned out to be a boar. ‘The sow was very poorly and not expected to live, but I nursed her round the clock and saved her. She’s now my Rosie – larger than life and very naughty. When we realised we had a boar amongst the group, we were advised we had some time before he would be mature enough to mate. As it turned out, he managed to impregnate two of the sows before we had separated him, so I found myself with a large litter of piglets.’

With the piglets all placed in new homes and the boar rehomed with a friend, Emma eventually settled for just three sows: Rosie, Beetle and Freda. ‘Very sadly, we had to have Freda put to sleep last year as a result of a shoulder injury that just wouldn’t heal, so there’s now just the two girls.’

Spotting us approaching from a distance, Rosie and Beetle come to welcome us, as Emma dispenses their lunch, which is heartily consumed – although a much smaller portion than you might expect. ‘There are so many misconceptions around pigs,’ Emma explains. ‘They are not particularly greedy; they are not lazy and they are not dirty either. They are amazingly intelligent, socially active animals, who display a lot of positively surprising behaviours. Pigs are easy to keep, but I’m not suggesting anyone keeps one in their house or their garden. They love to graze and need a big paddock. There is no such thing as a “micro” pig – don’t be fooled, as they grow to be very large animals. I feed my two twice a day, and in winter they have hay, but in summer, if it’s really hot, I have to top their wallow up at least twice a day. It’s really important to say that they have to live in pairs – you should never keep a pig alone.’

As Emma scratches and fusses the pigs, it’s clear that the affection is a two-way street. Beetle is more reserved, but Rosie settles in for a tummy rub whilst all the time ‘talking’ to Emma. ‘Pigs communicate constantly with each other and have a vocabulary of over 20 different sounds, each one with its own meaning: warning, greeting, hunger…’

So how exactly did these two become elevated from ‘livestock’ to pets and why did the plans change? ‘Well, I just fell in love with them full stop,’ replies Emma. ‘They are so special and not just to me. Lots of people in the village come and visit the girls and bring them treats. Older people love to see them as much as children do. They are quite famous around here and during lockdown they had lots of visitors, and I was online sending pictures of them to children who were unable to visit their grandparents in the village, providing a link in those hard times.’

With this breed living to up to 20 years old, Rosie and Beetle can look forward to many more years of fame and good fortune. Lucky pigs.

Emma Brown designs and supplies her own range of country and sporting clothing and also has a brand called Land Girls, selling products farmed by women. Visit www.emmabrowntweed.co.uk or call 07534 523638 for details.

We're delighted that our December 22 issue is now

We're delighted to let you know that the November

Delighted to let you know that our October issue i

Loved seeing the dinosaurs at @peterborough_cathed

So good Red Lion Square is open again…. Time for

Delighted to let you know that our September 2022